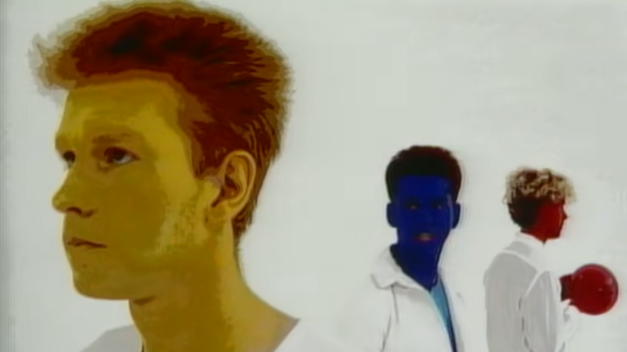 I can't stand this emotional violence // Leave in silence ‌‌
—A Broken Frame, 1982

Last night, a bit after 10pm, I felt uneasy. I was seating comfortably in my armchair, watching The Good Place on Netflix. But, suddenly, something felt wrong, out of place. As if a dark veil of either sorrow or nostalgia had covered me abruptly. Tried my best to shake it off, but simply couldn't; and couldn't find a reasonable explanation for that heavy feeling, either.

Around 11pm, it crossed my mind to run to the non-stop shop around the corner, and buy some vodka to ease my way into sleep. Decided not to do that. Tossed and turned all through the night. Also had a few nightmares. Didn't sleep well at all, so I finally woke up around 5:15am. Poured myself a cup of coffee, and turned on the news, just to learn that Andy had left us, just hours before...

I know people called him Fletch, but he's always been, and will be, Andy to me! I "met" the guys in spring '84, when my mate Șerban brought a DM poster and a tape to school. Yes, Dave, Martin and Alan were cool, and so was Vince. But I identified more with Andy. I loved their music, and immediately copied their first 3 or 4 albums on tape (it was Communist Romania in '84, remember?).

My personal favorite was Construction Time Again, whereof "Shame" and "Pipeline" clearly stand out for me. But I had, and still have, a soft spot for A Broken Frame, especially for the sounds of "The Sun & The Rainfall" and the video of "Leave in Silence." ... Play. Stop. Rewind. Listen one more time. Think of ways to spell that. Look up the word in the dictionary. ... That's how I learned my English!

Thank you, Andy, for all the joy you brought into my life! ♥ I loved more than just the composition of sound within your music—I also loved the lyrics and group dynamics, I learned about values, and took valuable lessons from you all. You and your mates at DM were probably the first crack that allowed light into my world. Thanks to you, I managed to learn and polish my English, and later take advantage of opportunities around me, to open up, to become who I am today...  Gratitude!!!‌

(I wish not to grieve, nor to mourn, but rather to party and dance to your music. I might not be that strong, though. "Unpredictable like the sun and the rainfall." My heart is really broken to pieces... Update, after more than a month: I learned from this video that Andy may have been a slacker; from other documentaries, that he's been the actual manager of the band; to be honest, I don't think that's relevant any more...)