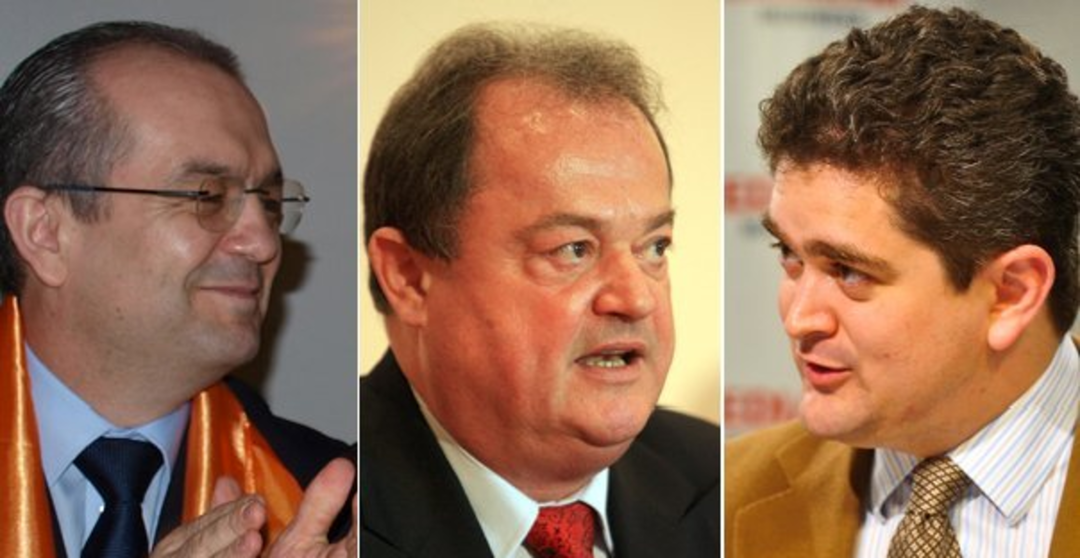 In politics, my friend, you either follow, or lead—there’s no other option! But mark my words: If what you do is only follow the opinion polls, you’ll never lead! —John Lisnik

I made a commitment to reflect on the internal elections of the populars, just as I did with the Magyars, the liberals and the socialists. Since they’d postponed this highlight convention for more than a year, I’d even dwelled on one of the preliminary fights. Some think the outcome of today’s internal competition not to be important for the public at large; others consider it of the utmost importance for Romania’s political, social and economic progress in the upcoming years. Depending on who wins the top position in PDL, different strategies and/or scenarios may unfold, ahead of the 2012 local and parliamentary elections. But I submit to you that either way, no reforms or major changes should be expected till spring 2014 🙁

It would be great to have Toader Paleologu as the new leader of the party, but he doesn’t stand a chance; even he admits to only one goal in this competition, namely to show there’s enough room for proper lingo, jokes and openness in politics. But Emil Boc and Vasile Blaga have no time for niceties. They clash for the top party position, with potentially different views/approaches—alas, with (very likely) the same results, eventually 🙁 Mr. Boc used to be a leader of the opposition, till 2004; continued to be a local leader, as mayor of Cluj-Napoca; turned into an undisputed follower of Traian Băsescu. Mr. Blaga used to be a follower in parliament and public administration; rose as a ministerial leader on the path to EU accession; offered mixed results in leading various electoral campaigns.

Does the party need a leader or a follower? With the label “party of the mayors,” you’d expect the top representative of the populars to be a follower—someone who caters to the needs of mayors, in order to solve problems and satisfy needs for citizens at the grassroots. But, in times of public management crisis, with severe economic undercuts, you’d expect the top guy to be a leader—someone who’d offer solutions to the macro, structural problems of the state apparatus. I prefer the latter, and I think Blaga fits the profile better than Boc; but I don’t vote in this party convention 😉 Boc, however, appears to have the better chances (as incumbents usually do), and may well get a new mandate at the top of the party, probably by a thin margin of the vote, possibly in the second run.

Regardless of whether Boc wins or loses today, another question crept on, during the past few months—will he continue as Prime-Minister? One option is to detach the top party position from that of top executive, in order to maintain (or improve) the party’s chances in the 2012 elections. Still, if the economy does recover, such separation works against the party. On the other hand, majority in Parliament is extremely thin, and passing a new Cabinet may prove impossible. The last thing we need is a political crisis juxtaposed onto the frail economic situation, in times of administrative turmoil. But do politicians really care?!? I think not 🙁 They’re only looking for votes in 2012 and money for financing the campaign that’ll win them votes in 2012. And that’s why I say nothing good can be expected till 2014!

The future is the mirror of the past, as Elemér Hankiss told me and other students at the IWM Cortona Summer School, in summer 1994. If you choose to look into the past, that’s exactly how you’ll shape the future. Irrespective of who wins today’s vote, our society seems incapable of shaping a future that breaks with the past 🙁 Politicians, both from the current majority and the opposition, offer to fix the mistakes of their competitors, rather than solve the problems that affect day-to-day quality of life. Blockage/blockade will continue to shape Romanian politics ahead of the next elections. Then, it’ll take the winners of the 2012 elections close to a year to place their own people/clients in various positions, as well as modify legislation, frantically, to suit their own needs—maybe start some criminal cases against former ministers, too…

That’ll keep them visible in the media throughout 2013, obscuring their lack of vision, direction, objectives or solutions. They’ll continue to depend on the IMF, World Bank and EU to tell them what to do and how to do it, so that Romania may appear to be governed. Brussels will continue the monitoring exercise, while we bask carelessly under the NATO anti-missile shield, taxpayers lead their miserable lives, and politicians follow up with rhetoric about difficult times, sacrifices and meaningless reforms. Bottom line, I don’t really care who’s going to win today! Leaders or followers, it’s all the same to any of us, as long as they only look into the past, reflecting their figures onto TV screens, humming to themselves, in a phony and pompous off-tune, “mirror, mirror on the wall, who’s the flawest of them all?!?”

Update: Reported results in favor of the incumbent—EB 855, VB 498, TP 55 votes. Alternative figures 868:499:24. The convention continues with elections for other members of the party leadership. Later update: The new team at the top of PDL available here.