Recently, I ran into an argument about the wrong perception that people get when they don’t have access to all relevant information. And I supported the view that reality really doesn’t matter, as long as all knowledge is mediated. The only ones that actually grasp reality are those involved, while all others impart a perception that may be closer to, or farther from, the real thing. [Of course, what else would you expect from someone affiliated with an organization whose flagship product is a perception index?]

I’m taking another look at Romanian media these days, after I learned that tabloids sell about twice as much as quality papers in this country. So, I flexed my imagination a little bit, trying to figure out how’s reality mediated. With no scientific evidence whatsoever, I decided that pictures are not enough in reflecting reality, in spite of the proverbial thousand words they often speak. A picture or a stat-graph on the cover of a tabloid (or a blog post, for that matter) needs an interpretation key—some abrupt or abrasive text, using very few words and, most importantly, no arguments (if possible!). One cannot counter-argue where there’s no arguments to begin with, so Resistance is futile!

The few words that provide the key to interpreting a pic/graph put a spin on the information, and twist reality around. Then, talk-shows twist and turn the original image and the initial spin, ending up in a soap opera of national proportions. The initial news is no longer relevant, but someone’s opinion on what “really” must’ve happened becomes mainstream perception. And who can counter-argue or beat that talking-head’s eloquent “my opinion is …”?!? Not even the people initially involved (the only ones that have first-hand experience of what happened), simply because they’re suspected of harboring some ulterior motive. 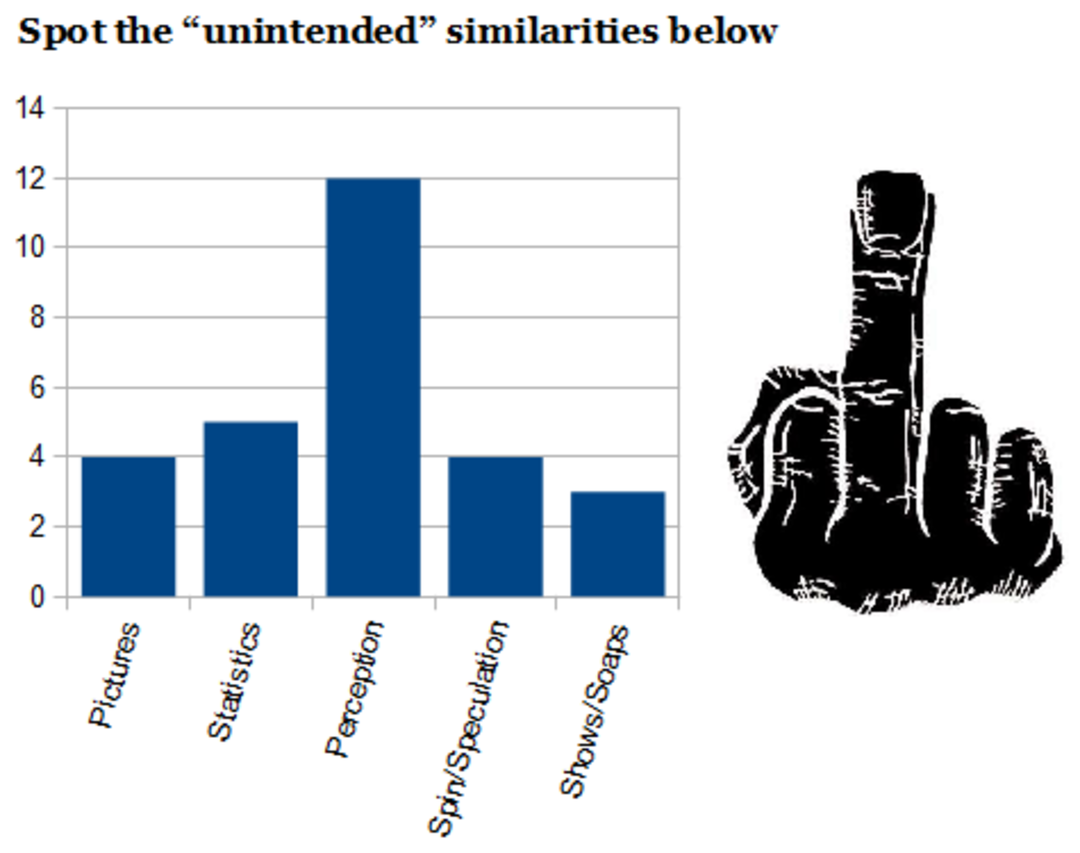 Thus, in my opinion, perception builds from pics and stats with support from spin and shows, beating reality every single time. The only chance you got is to beat perception at its own game, using its own weapons. Simply be the first to create a parallel or alternative perception, that matches reality as close as possible. In other words, be the first in pushing the story, use the same technique, and don’t ponder too much on the morality of manipulating the media! After all, you’re reflecting reality, and you’re linking your perception to sound research, with impeccable method and solid conclusions 😉 Right?!?

PS You know this post is a joke, don’t you?