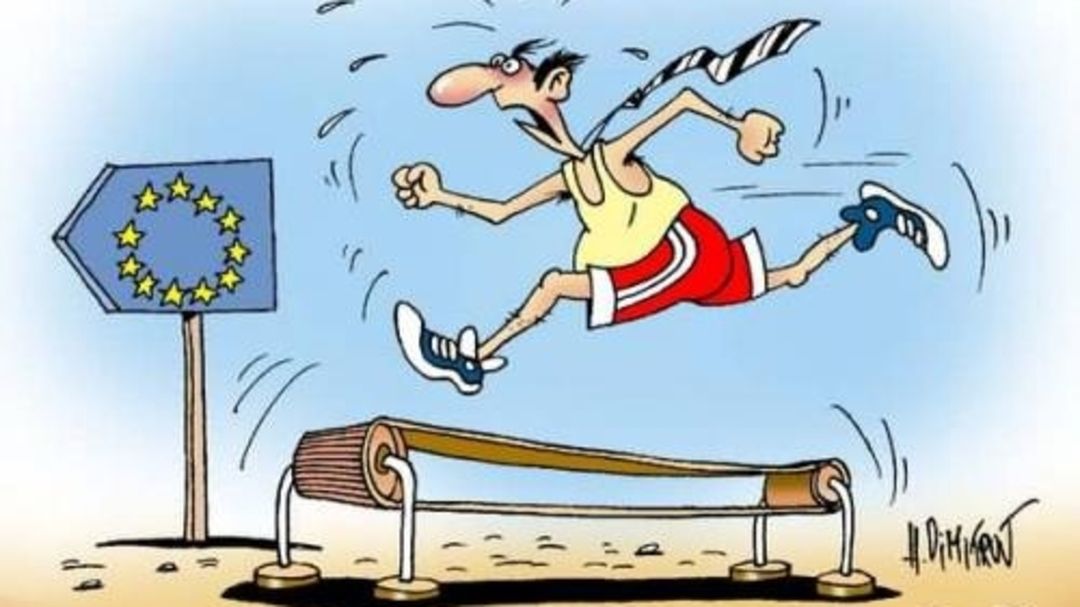 I’m tempted to write about the European Commission’s CVM Report of today. The evaluation of Romania’s progress on Justice and Anti-corruption Reforms is grim. To my mind, there’s no progress! While I concur with the Report’s conclusions regarding the poor performance of the Parliament, the Superior Council of Magistracy and even the Ministry of Justice, I beg to differ on the overall assessment of DNA–the National Anti-corruption Prosecution and ANI–the National Integrity Agency. I am of the opinion that all institutions perform(ed) poorly, and Rule-of-Law in Romania is on the brink of extinction 🙁 The good news is that we escaped the activation of the safeguard clause, says Mr. Predoiu, minister of Justice…

But we also have the strike that started about 3 weeks ago in the court system. Judges (and bailiffs) consider they’re entitled to higher salaries, while the Cabinet decided to curb salaries, because of the economic and financial crisis, as well as the provisions of the IMF and EC loan. Unfortunately, the Cabinet planned poorly, and implemented this decision through an ordinary ministerial order, instead of a full Ordinance. Hence, judges filed a lawsuit against the ministerial order, and won the case–moreover, they imposed a fine on the minister of finance, amounting to 20% of the minimum wage per day, for every day until salaries be fully paid! The case is now up for appeal and/or recourse, so it’s not over yet.

Of course, the crisis should bring various social categories together, and make judges sensitive to the overall cash shortage that affects everyone. Thus, commentators agree that judges should rather refrain from claiming higher salaries, as long as everybody else is affected. But judges normally work with the law–if the pay cut were passed through a Government Ordinance or an Act of Parliament, they may have backed down. But the ministerial order that postponed/staggered for 3 years the payment of a portion of their salaries (roughly 30% of the monthly paycheck) is not acceptable under the Rule-of-Law. Of course, once the new salary grid for the public sector (convened with the IMF) will be adopted, all of these things will be forgotten.

However, a very specific debt will remain outstanding: that portion of payments that were postponed since the adoption of the ministerial order until the adoption of the new salary grid. That debt will continue to affect the State Budget for several years, and judges are, and will continue to be, entitled to get it back. Because of the crisis, the State won’t have enough cash to pay it, and I’m sure the Cabinet won’t resort to foreign loans to cover for it. Hence, the only open door is for judges to ask (probably in court!) for a conversion of that cash debt into equivalents, whether it be lots of land from the private domain of the State, or something else. In essence, rolling such a debt, over several years and lawsuits, means that, ultimately, taxpayers will have to foot the bill, in the future, for the incompetence of our ministers, today 🙁

Let’s not despair, nonetheless… I do see an opportunity here: The Cabinet should be able to finally implement the legal provisions on multi-annual budgeting. This fall, the Cabinet should be able to present to Parliament a new proposal for a Budget Law 2010-12, built on very conservative projections, in full accordance with the staggered payments they’ve already proposed in that ministerial order that was intended for magistrates. Of course, I doubt that our Cabinet may pull together such a multi-annual budget, but I also think it’s their only solution. I see the opportunity, and I hope they’ll act on it. If they can’t, no problem–next year, the MCV Report would once again note that Romania made poor progress on Justice and Anti-corruption Reforms, with politicians engaged in the same sweet and sour pork as last year 🙁