The graph on the wall tells the story of it all.
Picture it now, see just how
The lies and deceit gained a little more power!

I received this paper slip in the mail, earlier this week, but only now had the time to pay appropriate attention to its contents. I’m quite happy that my electricity supplier took the effort to print and distribute these slips. However, it makes me think of the larger picture, especially about the role of monopolies, discretionary power and opacity–the three elements conducive to corruption. 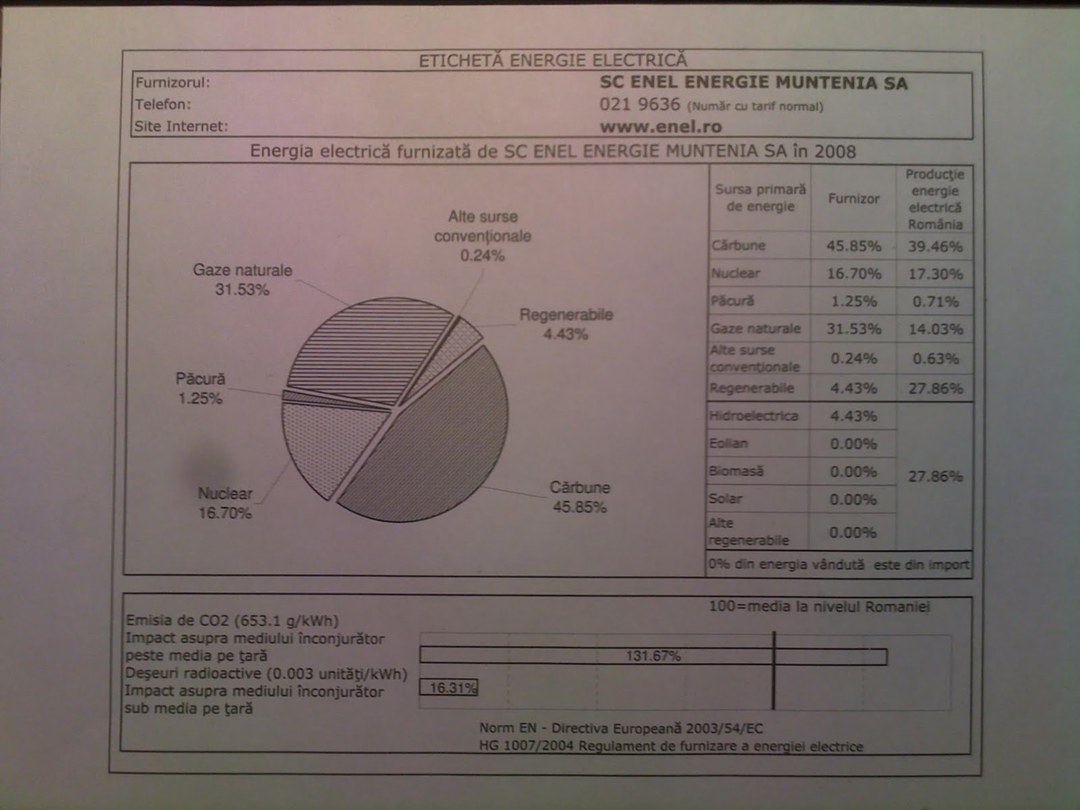 I’m quite satisfied with Enel’s willingness to disclose information about their primary sources of energy, although I’d prefer that they increase the proportion of renewables (now standing at only 4.43%, which represents 27.86% of the entire national capacity, relying solely on hydro), at the cost of coal (45.85%), gas (31.53%), and especially tar/peat (1.25%). Equally interesting, but not very surprising, I see 0.00% imports. Amazingly, they’re taking responsibility for, and disclosing, the level of their impact on polluting Romania (31.67% over the national average in CO2 emissions, but only 16.31% of the national average in waste radioactivity). But is this enough for them to gain my trust?

And here are the causes of my frustration: I have no idea what’s the acceptable level of CO2 emissions and/or waste radioactivity–is the national average lower, higher or equal to that acceptable level? Hence, I have no idea whether my electricity supplier is fully transparent and accountable. And, if they’re not, I’m frustrated with the impossibility of switching the plug to a different supplier 🙁 Equally frustrating, I can’t find what are they doing, if anything, to build new capacities for renewable sources and/or to reduce their impact on pollution at national level. My suggestion to Enel-Romania: Publish the graphs off this slip onto your website, and add information that would help me appreciate your services! Otherwise, you’re no different from the Government 🙁

Actually, how could they be different? We simply replaced the monopoly of a public agency with that of a private operator. In an ideal world, privatizing a public service, such as electricity supply in this case, should allow customers access to improved … something! Indeed, transparency is an improvement, even when incomplete, but it’s not enough! Privatization intended to stimulate competition among private suppliers, while the absence of alternative distribution grids actually beats the purpose 🙁 Therefore, all such parastatals (private agents that perform public services) should meet the transparency and accountability standards required of all public institutions. When a monopoly operates with opaque procedures, the door is open to discretionary power, and then misusing that power for private gain becomes so easy, that corruption is already in the house 🙁

But the damage’s been done, already, before privatization, and lies with the regulatory framework. Generally speaking, the private operator finds it easier to comply with the national rules on the ground, than with the governance standards from their headquarters. Thus, as long as the Government has no strategy on either fighting corruption or restructuring the state apparatus, why should parastatals go out of their way to inform end-users completely about their operations? I guess this is the ultimate source of my frustration: While integrity, transparency, accountability are absent from the public sector, the private sector has no incentive to push standards upwards–rather, they’re all rent-seekers engaged in a race to the bottom 🙁