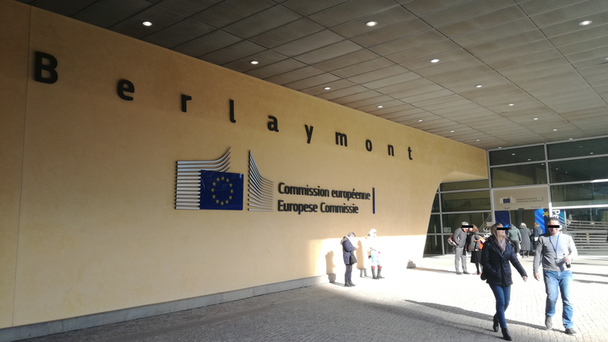 Last Monday, I traveled to Brussels with Club Europa. Just for a couple of days, visiting the European Commission. The Club is a loose network of professionals interested in EU affairs, that was created throughout 2004-07. (If I'm not mistaken, before accession, it used to be called the network of multipliers of EU information.) The Club is (still) loosely sponsored by the Representation of the European Commission in Bucharest, with yearly network meetings that usually happen in Sinaia, late June or early July. Last year, quite exceptionally, considering the European elections and the formation of the new Commission, the Club members were invited to visit Brussels. I opted for the second group, some time in December, but the trip got rescheduled for early February, namely last week.

I was interested in learning about 3 major topics, and expressed an additional tiny curiosity:

Now, post-Brexit, that we all 'learned' the EU is using Irish English instead of British English, let me explain the title, nonetheless: I coined the o'flaw spelling in 2009, and used it several times on my blog. But I must confess that, some time along the way, I realized that even I had never explained it properly. After what I heard in Brussels last week, it's high time that I fix the error, at least for the readers of my blog:

Conceptually, I'm afraid that we're using the phrase rule-of-law in 3 very specific senses that very often overlap, and we're not equipped with the proper tools for disambiguation. I am now aware that I've seen this particular error in all sorts of writings and debates, including in the presentation at the Commission, last week. Nobody's perfect, right? 😛 Even I missed the crux of the matter for more than a decade, both on this blog and in my other writings. But I am grateful for the revelation! Being specific about the meaning of the phrase will help prevent flawed conversations.

We may want to look at rule-of-law as a political value that represents the political (and legal) limitation on the exercise of political power, the constitutional constraints or the checks & balances. We all understand that political power tends to become absolutist and/or abusive, regardless of whether originally gained by elections, appointment or anointment. We would all love to see political power exercised with self-restraint, but we all know that it's better to play it safe, and introduce constraints. I believe that we all agree on this political-value view of rule-of-law as limitation, but we may have different views on how to operationalize the constraints and the proper balance with self-restraint.

Further, we tend to look at rule-of-law as only one, very particular, constraint from the entire possible range, namely the supremacy of law. I believe this is a social value with both legal and political connotations, and we probably all agree that all citizens are equal under the law, and before the law. I also believe that we all agree the law must stem from the people, expressing the majority will. But I'm afraid not all of us agree that the majority will must never harm a(ny) minority. This latter principle is an additional constraint, meant to protect human dignity. And some people simply do not recognize the fundamental human right of specific individuals to, one day, feel that they belong to a particular (social and/or political) minority.

The third sense that we attach to the phrase rule-of-law relates to how we operationalize both the political value and the social value (with their legal connotations) in the relations between state and society, and/or between state and individuals. Strictly looking at the adjudication of conflicts, rule-of-law starts to mean judicial independence, and I think there's no agreement on why we should have it or how we should build it or implement it. I believe there's no common understanding to judicial independence, at least not one that could be replicated across various jurisdictions. And additional varieties continue to appear even outside of what we call regular state jurisdictions today.

Going back to Brussels last week, I didn't get many answers to my 3+1 topics of interest, but I got this revelation about the rule-of-law. And I say this revelation is a lot more valuable! I now understand that I've been part of the problem—I never properly established in which of the 3 senses/meanings I was using the phrase. And from now on I can be part of the solution 😉 From now on, I'll be using the rule o'flaw spelling only for instances where I sense that someone tends to confuse partners in a conversation, by not properly qualifying their meaning of rule-of-law. It'll be my modest contribution to properly informing the public 🙂